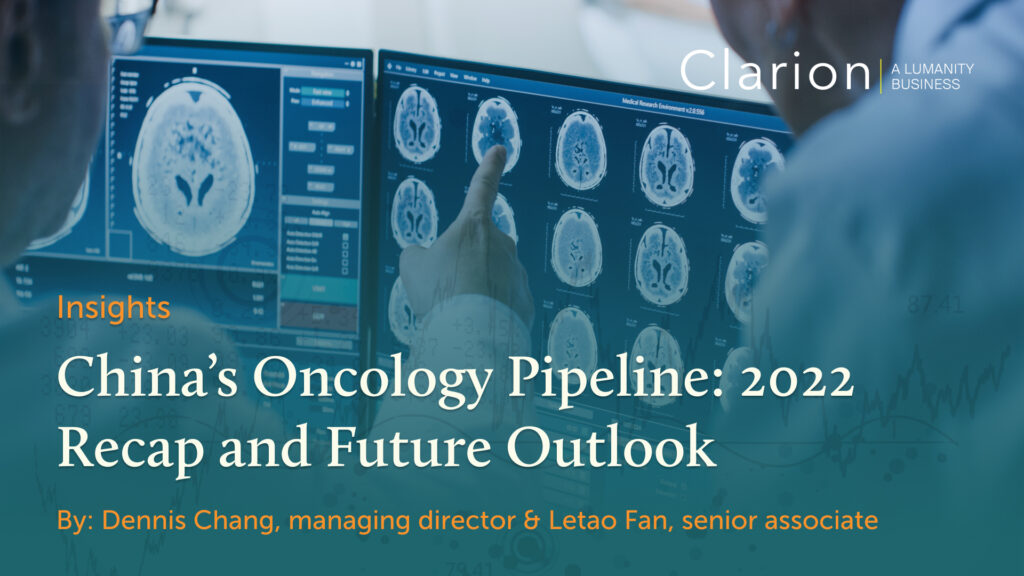 In 2022, China was at the center of a significant amount of international news coverage, most of which focused on the ongoing COVID-19 pandemic, including widespread lockdowns. These reports painted a picture of disruption to society and the economy. However, China’s oncology pipeline seems more robust than ever. The 25th Annual Meeting of Chinese Society of Clinical Oncology (CSCO) showcased signs of growth and acceleration in the oncology pipeline.

At CSCO’s opening session, officials from China’s Center for Drug Evaluation (CDE), part of the National Medical Products Administration (NMPA; formerly the China FDA), provided a review of the year’s clinical and regulatory activities in oncology (Jan through Oct 2022) and the numbers are startling.

Thus, China is closing in on the U.S. in terms of the number of oncology clinical trials—and exceeding the U.S. in oncology INDs and NDAs. This is the culmination of steady growth in oncology clinical development since China enacted a major regulatory reform, the 2017 Opinion Regarding the Stimulation of Pharmaceutical Innovation and Implication of Priority Review and Approval (the “2017 Opinion,” 《关于鼓励药品创新实行优先审评审批的意见) [4]. This growth has continued even after the Priority Review pathway established in the 2017 Opinion was narrowed substantially in 2020 with the New Administrative Measures for Drug Registration (the “2020 New Measures,” 新《药品注册管理办法》) [5], though the pace of growth is expected to slow moving forward [1].

…but how new are China’s new products?

The impressive number of clinical programs are tempered by the relatively limited extent of new product innovation. As of October 31, 2022, out of 55 oncology approvals in China, there were only four new therapeutics approved for their first indication that also originated in China:

Among these four homegrown new products, only one constitutes as a first-in-class approval; cadonilimab is the first anti-PD1 × CTLA4 bispecific to be approved worldwide. The remaining products fall into well-established drug classes. Similarly, many new data presentations at CSCO 2022 were for new Chinese products with mechanisms of action proven by others. Examples include Dizal’s sunvozertinib, an EGFR exon 20 small-molecule inhibitor similar to Takeda’s mobocertinib, or Zentera’s ZN-c3, a WEE1 inhibitor similar to AstraZeneca’s adavosertib (AZD1175).

While China continues to generate only a small number of first-in-class new drugs, the fact remains that China has demonstrated the ability to do so. Furthermore, the “me-too” products that China develops are competitive with their Western counterparts. For example, ripertamab demonstrated non-inferiority to rituximab in a head-to-head phase 3 trial, with numerically lower rates of anti-drug antibodies [6], and serplulimab improved OS in a phase 3 trial for first-line treatment for extensive-stage small-cell lung cancer (1L ES-SCLC) [7], an indication where pembrolizumab failed to do the same [8].

Serplulimab is the most recent of nine China-originated PD1/PD-L1 inhibitors approved to date; there are dozens of others in the clinical pipeline including, bispecifics like cadonilimab and other variant molecules. This profusion of therapeutics targeting the PD1/PD-L1 axis are the fruits from a surge of investment made by the Chinese biopharma industry in immune checkpoint blockade after seeing the success in the West of nivolumab, pembrolizumab, and others. Although immunotherapy investment continues, China has declared a new focus area for investment and innovation: ADCs [9].

To date, the development of ADCs in China includes 24 targets (Figure 2) [9]. In line with China’s historical proclivity for copying successes made in other countries, there is a heavy emphasis on targets established by ADCs already, such as HER2, Trop2, and Nectin-4. However, there are also examples of innovation and leadership; China is leading the world on the development of Claudin18.2-targeted ADCs, and is also racing against Western countries to be the first to launch ADCs against known oncoproteins such as c-Met and EGFR.

Takeaways for the West

China’s biopharma industry should not be underestimated. Although the majority of China’s home-grown pipeline consists mainly of “me-too” therapies, the pipeline has grown vast and includes examples of first-in-class and potentially best-in-class products as well. When China invested full-throttle into immunotherapy, the generation of Chinese anti-PD1/PD-L1 products eventually exceeded that of all other countries combined, and included the world’s first approved anti-PD1 × CTLA4 bispecific. China is poised to do the same for ADCs and continues to develop prolific numbers of other therapeutics as well.

So, what should top global biopharma companies do?

If we rise to the challenge in these ways, then the resulting increase in productivity and innovation in oncology therapeutics will be a boon to cancer patients and their families.

Clarion, a Lumanity business, is committed to partnering with biopharma clients to anticipate evolving market dynamics and navigate their toughest challenges. Please contact us if you would like to learn more. For more information, visit www.clarionhealthcare.com and follow us on Instagram and LinkedIn.

[4] NMPA website: Policy illustration – Opinion Regarding the Stimulation of Pharmaceutical Innovation and Implications of Priority Review and Approval (Suspended) https://www.nmpa.gov.cn/directory/web/nmpa/xxgk/zhcjd/tjzhc/tjzhcyp/20180112093701550.html

A life sciences strategy and organizational consultancy that collaborates with its clients to envision, craft and enable growth through innovation and leadership.

Is Clarion the right place to advance your career?

Find out more about joining Clarion’s team of innovation advisors.

A life sciences strategy and organizational consultancy that collaborates with its clients to envision, craft and enable growth through innovation and leadership.

Analytics cookies are used to understand how visitors interact with the website. These cookies help provide information on metrics the number of visitors, bounce rate, traffic source, etc. which in turn help us understand behavior and create a better user experience.

Performance cookies are used to understand and analyze the key performance indexes of this website which helps in delivering a better user experience for website visitors.